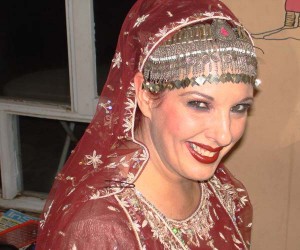 I always liked to think of Debbie as the queen of Kabul, and when she had her café her personality drew in the crowds. She would sit at her usual table, working on her computer, surveying the scene, always smiling and talking, always charismatic, a natural storyteller.

Debbie Rodriguez is the American hairdresser who, after years living of in Afghanistan, went on to write her first best-selling book, The Kabul Beauty School, about her experiences of working and setting up a salon and school.

In 2007, when we met, I used to look forward to her movie nights at the Cabul Coffee House where she held court. They were on Tuesdays, and Debbie would usually get a bad pirated version of a recent film, picked up at a local market, and she would show it on the wall. Usually a pretty gregarious group of about12 people turned up.

The first film was The Last King of Scotland, which is about Uganda’s barbaric president Idi Amin and his bloody reign in the 70s. No matter how many times I watch this film, it affects me.  Seeing it in Afghanistan had particular resonance.  It wasn’t that many years before that there had been a brutal regime in power, and ensuring the Taliban didn’t return was at least part of the NATO mission.