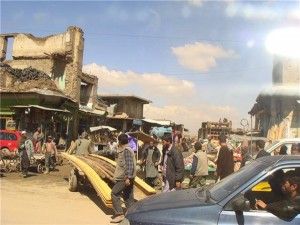 Echoing streets in night-time Kabul are generally only peopled by guards at the ‘Ring of Steel’, a series of checkpoints around the capital. Despite this there was a lively nightlife. It was early spring and I decided to have a small birthday celebration.

While I’m not the blowout bash type who flies friends and family to exotic locations, I arranged a small gathering on April 7th, 2011 at my house. There was, as usual, one hitch. If I had my party there, my good friend Gracie wouldn’t be able to attend. She lived under the often absurd security restrictions imposed by large corporations and organisations.

Gracie and her colleagues were forced to stay in their fortified compounds or let out when driven by one of the company cars to and from pre-approved destination.  For most of us, those security strictures were entirely unnecessary. The solution was easy and obvious – shift the party’s venue to Gracie’s place.

As I am not actually a very hardy drinker, how I survived as a Fleet Street journalist remains a mystery, I ended up with quite a lot of alcohol for various reasons – people brought wine over, American and British friends purchased booze at the embassies, and on occasion people would bring contraband back into the country from Dubai or further abroad. Alcohol was a tricky issue. For Afghans it was illegal, it became more and more difficult and more expensive to procure, but the access to it made living there a lot easier and more fun for most expats, and some Afghans.

We managed to transport everything the short distance without too much hassle. At the end of the evening we packed up the remaining alcohol and put it in a suitcase. One of the guards carried it to the taxi we had called. ‘Trust’ cars were reliable, safe, and English speaking.

It was a pretty routine trip of a few minutes, except on this eerily quiet night. The car was stopped by the Afghan National Police who insisted on checking out the piece of luggage, which was on the backseat beside me, not in the boot.

The taxi driver negotiated skillfully, saying that I had personal items inside, and that he should just let me go. The banter between the two men went on for 20 minutes, with frequent police interjections insisting that he look inside. Finally, we agreed that I would pay a bribe, something I had never done before.

How fortuitous that had gone to the ATM earlier that day. I extracted a an American $20.00 bill, but the police office just scoffed when I gave it to him. I gingerly took out another, and another and another. Eighty dollars was my limit.

It couldn’t have been random bad luck, but clearly a tip off from, most likely, someone at Gracie’s house, and my first, and only, shake down in the corruption capital.