Women’s bodies should be theirs to control, not a battleground in backward US states 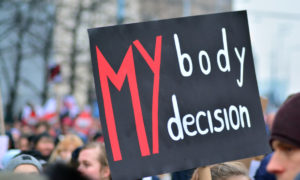 Once again, women’s bodies have become a battleground in the United States. From Alabama to Georgia, states are repealing abortion rights. Once again, even in the #MeToo era, women are losing control over their lives and their futures. Those of us who grew up in liberal democracies never thought we would see these kinds of setbacks, but then again there are many things we never thought we’d see. (And not just in the US.)

One difference between the reaction of Britain and the  US is explained by Jonathan Sumption, former Supreme Court Justice, in his third BBC Reith Lecture “Human rights and wrongs”. Lord Sumption says, “The abortion debates surrounding the 1967 Abortion Act were very remarkable in the extent to which MPs debated, in an informed and enlightened way, the issues involved, and I think that was one reason abortion has become in this country and most of Europe, relatively uncontroversial. Where it was a matter of judicial decision, it remains extremely controversial.” It was political action not legal action that brought about change.

We hear a lot about late term abortions as part of the debate, but they are very rare. In the UK, only 1.3 per cent occur after the 21st week of pregnancy, and less than 1 per cent occur after 24 weeks. Late-term abortions usually take place when the mother’s health is at serious risk or when foetal abnormalities have been detected. A 2013 British survey found that most women seeking late-term abortions were either “raising children alone, were depressed or using illicit substances, were in conflict with a male partner or experiencing domestic violence, had trouble deciding and then had access problems, or were young”. Bans on abortions, they concluded, “would affect young women and those with limited finances.”

And it is always the poor who suffer, because middle and upper class white women will always be able to find ways to have a termination, and the frontline US states target poor, socially marginalised communities.

Even though in England, Scotland and Wales, women can have an abortion up to 23 weeks and 6 days, and it has been legal since 1967, it remains a contentious issue. This brings me to a recent article written by David Alton in TheArticle where he talks about “the child in the womb”. For those on the pro-choice side of the debate, this is an emotive phrase because a child is a child only once it is born. Until then it’s a foetus.

Lord Alton also wrote how unwanted children can become loved members of their families, but too often these children are born into chaotic households where the parents or the mother can barely look after themselves. Unwanted children are often abused, neglected and maltreated, not loved, adored and nurtured. While women are told they will be supported, who is going to support them? The mental health of women who chose to terminate their pregnancies is much better than women who have unwanted children. And women rarely make the choice to have an abortion lightly. Abortion, for some, is a necessary if  unfortunate method of contraception.

In countries where abortion is pretty much illegal, like Brazil, the results of criminalising abortion are interesting. Experts estimate there are about one million terminations a year there because women can easily access abortion drugs. The unintended consequences, as Michelle Oberman has written in her book, “Her Body, Our Laws: On the Front Lines of the Abortion War, From El Salvador to Oklahoma”, are disturbing. The Santa Clara University law professor wrote in the New York Times recently that “when abortion is a crime, the emergency room can become the scene of a criminal investigation, and doctors the detectives. If a woman takes the wrong drug or the wrong dosage, particularly too late in pregnancy, she is likely to wind up in the emergency room, bleeding. There is no quick way for doctors to tell the difference between the haemorrhaging from a natural miscarriage and that from an induced abortion. But this hasn’t stopped governments from tasking them with trying.”

In a study published nearly two decades ago, John Donahue and Steven Levitt found a correlation between abortion and crime. Their hypothesis is that once abortion was legalised in the 1970s, crime declined in the 1990s as a direct result. Even after the Supreme Court legalised abortion after Roe v. Wade in 1973, it was still almost impossible to get abortions in some states. The study compared states with high abortion rates in the mid-70s to those with low ones. Crime decreased by 30 per cent in the states that had high abortion rates. The Donahue-Levitt hypothesis remains controversial, but it supports the view that unwanted, neglected children are more likely to end up as criminals.

For me, it’s a very positive step that both Disney and Netflix have added their support to the pro-choice campaign by saying they may pull their business out of Georgia. A woman who doesn’t want to have an abortion doesn’t have to have one, but a woman who doesn’t want a child should have the choice, no matter where in the world they live. Fundamentally, it is a woman’s right to choose, because having control over your body is ultimately a human right.