The nauseating apologies from wannabe prime ministers must end 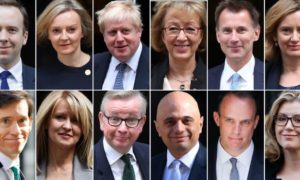 Mea culpa, mea culpa, mea culpa. The guilty confessions are erupting from politicians faux-troubled consciences like molten lava from Mt Vesuvius. Michael Gove has done it, Rory Stewart has done it, Dominic Raab has done it – and frankly, who cares? Our prisons would heave with writers, politicians, journalists, entertainers and dozens of casual drug users if everyone who had snorted a line of cocaine, had a cannabis lassi or sneezed into his cocaine were locked up. Illegal drug use is a serious issue, and that’s neither debatable nor equitable. Savid Javid may be right about the consequences of Class A drugs from the streets of Columbia to Chelsea, but the problem here is apology.

There is just too much of it around. The obsession for apology makes it both meaningless and quite impossible to bear. Environment Secretary Michael Gove has confessed to using cocaine, Rory Stewart apologised for smoking opium, Dominic Raab admitted to drinking a cannabis lassi, Boris Johnson couldn’t snort his cocaine because he sneezed. It seems likely that the only reason Gove is falling over his mea culpas is that journalist Owen Bennett’s soon-to-be-published biography, Michael Gove: A Man in a Hurry, outed him.

Whatever happened to the good old sex scandal barring you from high office or bringing down governments? That’s no longer an issue, luckily, as serial seducer Boris Johnson proves by his myriad affairs. Makes you long for the past.

Gove strikes me as a Uriah Heap figure as he sheds crocodile tears about his regrettable past, only unfortunate because he’s now seen as a hypocrite because of a piece he wrote years about the dangers of drug taking rooted out by The Mail On Sunday. It’s the hypocrisy that stings, but it’s become fashionable to confess, apologise and seek forgiveness, and apologise again as if by saying sorry the past is eradicated.

We live in a holier than thou era, where people must have innocent lives, and must respond in the way that we deem fit, not how as individuals we want to live. They must be flawless characters who haven’t learned from life’s experiences but emerged fully formed. On university campuses, students need safe spaces and trigger warnings as if by magic, they can obliterate the realities that await.

In our finger-pointing age, nothing can be grey. It’s black or white, right or wrong, no nuance, just innocence or guilt. These days it’s all about moral superiority and blame and our need for human perfection when that is untenable and unrealistic, as the American novelist Bret Easton Ellis points out in his brilliant book, White. Confessing misdemeanours and apologising is about getting absolution, getting attention, and giving thousands of apologies. “The brand is where the game is,” says Ellis who also writes about his cocaine habit.

I profoundly regret meaningless apologies. Perhaps we can now get on with the serious affairs of state and put these mea culpas behind us.