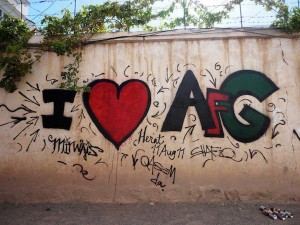 “You are listening to 98.1 Arman FM, Radio of the Hearts. This is The Night of the Lovers.”

Love is in the air.

The media’s success in Afghanistan has been one of the country’s positive success stories, and as the title above suggests even in this complex conservative country, tiny fragments of hope peak through…even the possibility of romantic love.

A popular new radio call in show is all about broken hearts and doomed romance, nothing new for our jaded audiences, but a revolution in Afghanistan where interaction between the sexes is largely forbidden, marriages are arranged, and men and women don’t date. Even female victims of rape are in jail for “moral crimes”. In an honour and shame-based culture men and women are heavily restricted in their interactions, especially when it comes to romance.

Technology has started to change the relationship young urban men and women have with each other as they connect online, by phone and sometimes even in person. Even Valentine’s Day has made an appearance in Kabul.

In a recent article by Mujib Mashal in Matter, he explained how on Friday nights DJ Ajmal Noorzai hosts the show where callers leave messages about heartbreak and separation, unrequited love or thwarted passion – there is no interaction, just sharing about a taboo subject, where people can unload their emotions in a sort of confessional.

It’s a subject I touch on in Dispatches from the Kabul Café, in the chapter ‘A Girl with no Borders’, where three young women talk about their different approaches to love and romance. The most beautiful of these is traditional and conservative and happy to have an arranged marriage; one is boy-crazy and hopes to marry her university professor; the other longs for love, still a dangerous proposition which is why those who call the show are anonymous.