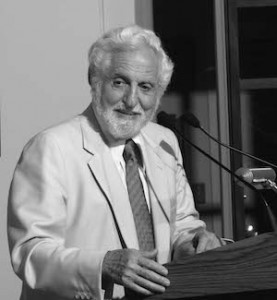 Carl Djerassi changed the world. Rarely is that kind of hyperbole a statement of fact, but in this case, it’s true. Known as the Father of The Pill, he was the chemist who, in 1951 synthesised norethindrone, the key component in the birth control pill, ushering in the sexual revolution by finally giving women control over their own bodies.

Carl’s home in London mirrored mine. We lived on the same street in exactly parallel, though entirely different, flats. I discovered this when I interviewed him, not as a scientist but as a playwright, an occupation he took up at the age of 65.

Carl died on January 30th of complications from cancer at the age of 91. Until the end he lectured at Stanford, where he was emeritus professor of Chemistry. He travelled the world giving talks and overseeing productions of his plays and he continued to write. He divided his time between London, and San Francisco where he died, and Vienna where he was born.

Despite the passing of more than half a century, 79 per cent of women in Afghanistan still don’t use contraception, and the average Afghan woman has five children. Afghanistan has the highest birth rate in Asia,, and while abortion is illegal, it remains the only form of birth control available.

I was privileged to know Carl and his wife Diane Middlebrook, also a Stanford professor and accomplished biographer, before cancer killed her in 2007, and to call them both friends. RIP.