‘Dispatches’ reviewed by Board Member of Civil Vision International 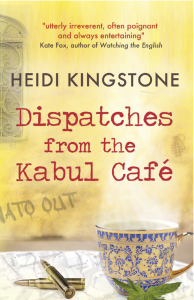 Schuyler K. Geller, Principal Consultant at The Copperridge Group and Board Member of Civil Vision International, has published this wonderful review of Dispatches from the Kabul Cafe:

I have just finished reading your book. Much stirring of memories suppressed of so many Afghans left behind, the mission impossible we were given, so many, many failures paraded by leadership as success if but for the single Kodak moment during its proclamation, and the $BN wasted not to mention all those precious lives (Afghan and coalition). The utter futility of it all continues to haunt me. I walked the streets you walked and ate in restaurant you describe. I was there to oversee the training and development of the ANSF Health Departments. In that capacity, I watch over the autopsies of the Little expedition at the National Military Hospital where the bodies were taken. The wounds were not quite as you described but equally horrible. Powerful book. Thank you for providing this picture of Afghanistan and the “humanitarian” missions by so many misguided donor nations and NGO’s whose actions and mere presence were but “…sound and fury, signifying nothing.” My own mission was doomed before I ever got there but no one would own the farce…my crime was speaking the truth. So few want to hear such…too much ego, reputation and greed tied to the unattainable outcomes. And so leadership finally declares victory and leaves. History has always lied….your book doesn’t.

Thank you, Schuyler, for this moving and candid review.