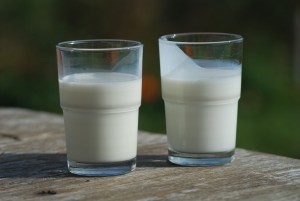 The factory simply gleamed, there was a surgical theatre spotlessness that made it sparkle with cleanliness, hygiene and efficiency, which perhaps would not have been that surprising had the location not been in northern Afghanistan.

The factory produced fresh pasteurized milk, cream, cheese, butter, buttermilk, yoghurt, and chaka (quark). While it was supported by foreign funding, the inspiration came from an Afghan man whose passion pervaded everything. His mission was to provide a system of milk processing that would ensure food security in one of the most volatile countries in the world. Part of the project was to educate women and children about the importance of diary products, considered a luxury, in their diets.

It hadn’t been an easy task and at first there had been resistance from farmers who distrusted the foreign programme so when milk was collected from several points around town, the dairy found that it had been diluted with water.

As part of the programme, the women were given education on better animal husbandry techniques, such as putting feed for cows in boxes, rather than scattering it on the ground, which leads to less waste and better hygiene. As the average amount of milk increased produced per family per cow, so did their income The products were sold locally and families felt ownership in the project.

The head of the diary proved that things can work in Afghanistan.   His organisation and vision resulted in tangible results, which are sadly few and far between. It was also one of the best yoghurts I had ever eaten, but unfortunately they don’t deliver to London.