Whatever Happened to Olga? 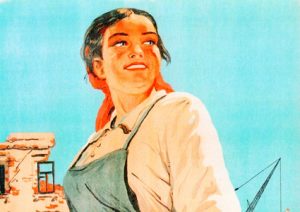 Do you find yourself, like me, longing for the days of the Soviet Union and dreaming that sometime in the not too distant future the Iron Curtain will once again descend?  While communism holds no special appeal for me, the women so beloved of the eastern bloc do.

Walking around the old Soviet factory in Narva, Estonia, recently, meters from the border with the Russian Federation, stuck on a pillar, Olga gazed out from an old USSR propaganda poster. Grey and grainy, Olga typified hearty, hefty Soviet womanhood. She was built like the tractor she inevitable drove with one hand, harvesting the wheat fields of the motherland with a sickle and scythe in the other and singing patriotic songs. She had a broad, make up-less face, fat, rosy cheeks with a three-pointed kerchief holding her short hair in place while she furthered the causes of the revolution. Nothing could be further from the bourgeois ideals of beauty and femininity.

All was good until Nikita Khrushchev, who wanted to kick start the Soviet fashion industry. Then came Gorby with his western ways and Raisa with her style. The final blows came in 1989, when the Berlin Wall fell and in 1991 when the Soviet edifice crumbled. The Iron Curtain shot up and without any warning, like a nightmare version of living matryoshka dolls, out popped a never ending phalanx of supermodels, one more gorgeous than the last. Where the hell did these women come from? And whatever happened to Olga because I am quite sure she did not marry an oligarch? Perhaps they were always there but just erased out by canny Soviet propagandists for eagle-eyed Kremlinologists as opposed to simply erupting, phoenix-like, from the ashes of a kaput ideology.

This phenomenon has puzzled me for twenty-five years. John Lloyd, who was the Financial Times Moscow bureau chief from 1991-1995, has his explanation. “During the Soviet era the internal propaganda was to emancipate women. The emphasis was on equality and the masculinisation of women. And, of course, there was little access to good make up and decent clothes.”

Despite the official edicts, most Soviet women were having none of this mother lode of nonsense or dowdiness. While no luxury industry existed, women set enormous store by looking beautiful.

“The feminist (?) revolution never happened in Russia,” continues Lloyd, “because if, for example, you came from a Siberian village all you wanted to do was get out. Men drank themselves to death by forty and the rest were thugs. There were not many options and marrying well was one of them.”

Mariana Haseldine, an expert in Russian cultural history, remembers her mother and her friends putting great store in dressing immaculately. Some would make their own clothes, while the wives of the powerful men of the Politburo had access to their own dressmakers.

In Haseldine’s mother’s generation, women were conscious of the fact that there were few men after the war so regardless of the relentless internal propaganda, Soviet women listened to their grandmothers: they did not eat potatoes or white bread in an attempt to keep slim, they exercised and used beetroot to rouge their cheeks and lips. Haseldine, who grew up in Russia, remembers her mother, a chemist, following the fashions of the German magazine Burda, which was hard to get hold of but inevitably circulated.

For Russian women, like most others of the time, French women and French style were the apogees of good taste, and in 1959, designer Yves Saint Laurent, then head of the house of Dior, travelled to the Soviet Union at Khrushchev’s invitation. YSL inspired one of the most powerful Soviet women, Yekaterina Furtseva, who in 1957, was only the second woman to be admitted to the Politburo. She had immense influence over culture. “Furtseva approved Dior’s collection,” says Haseldine, “because Dior’s famous grey was suitable for Soviet working women and the lines were modest enough so they looked proper on decent women.”  Christian Dior himself had harboured romantic notions about the revolution and the USSR in the 1930s, like many of his privileged ilk, but sunk into a deep depression when he came face to face with the grim reality. Which went on to get grimmer.

Now our grim reality is to see these hitherto unknown women on the cover of every fashion magazine, draped over billionaires, frequenting the most fashionable clubs and restaurants around the world.

Albeit, the Russian Federation and President Putin may have more pressing matters to deal with. Back in time, the KGB dominated, Pravda was not the truth, super athlete Olga Korbut was drugged (and raped) and dissidents ended up in the gulag and defections were commonplace. Not so long ago two members of anti-Putin punk feminist group Pussy Riot also ended up in Siberia. Now there is the scandal surrounding Russian state-sponsored doping across Olympics sports in which the FSB had a hand. A decade ago, former spy Alexander Litvinenko defected and was poisoned in London having accused Putin of ordering the murder of Russian journalist Anna Politkovskaya.

In Nobel Prize-winning journalist Svetlana Alexivich’s new book, Second-Hand Time, she quotes the manager in an advertising agency in Russia: “women aren’t looking for their knight in shining armour to come galloping in on a white horse – they want him on a sack of gold. Money rules the world!” The oligarchs’ bimbos say as much about Putin’s Russia as the tractor-driving Olgas did about Stalin’s or Khrushchev’s.

Clearly, the supermodels were some Soviet drug-related experiment that went terribly wrong or perhaps a communist-inspired plot. It’s possible that one may end up as First Lady if The Donald becomes president of the United States. Mrs Trump was born in the former Yugoslavia. For the rest of them, it’s time to Cossack-dance back into the giant matryoshka from whence they came, which may have been from Russia but not with love.