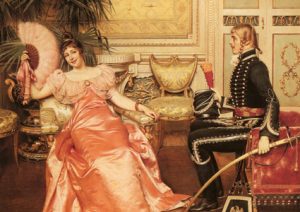 This article was first published in the July/August 2016 issue of Standpoint.

Could the greatest dilemma faced by men and women today come at the end of a meal when the waiter appears with the bill? Hamlet’s quandary pales into insignificance as the question “to pay or not to pay” surfaces and the dating diners must decide who picks up the tab, possibly determining a happy future or a doomed destiny.

In an attempt to resolve this issue conclusively, I scientifically polled a few friends. A 21-year-old who considers herself a feminist said she needed the man to pay. A 55-year-old said if a man paid it undermined her credibility as a professional and a feminist. A 30-year-old woman said if a man didn’t pick up the tab he crossed a red line, terminating any future prospects. When she split the bill, it indicated friendship, not romance. One married couple, who share a joint account, went out to lunch, she paid the bill as her husband had forgotten his wallet. They both felt it was strange. A British-Nigerian princess never paid and never offered to pay, on principle. Anyone who wanted the pleasure of her company didn’t get it for free (and they probably didn’t get much else). A 40-something, left-leaning feminist just likes to go Dutch.

For men, the minefield is littered with the corpses of potential relationships and weeks of indecision and mental flip-flops. One man, having grown up in a house of strong feminists, froze on dates like the proverbial deer in the headlights — afraid to violate the sacred equality code, but equally, as a romantic at heart, happy to pay.

While old-fashioned rules may have been dispatched unchivalrously into oblivion, it seems that this is something still deeply encoded in our genes, as there is no rational explanation of why a man should pay and why a woman should want him to, except for the half-dead romantic notion that men protect and provide, and that money is linked to love, even if we know it isn’t. And despite women being fully self-sufficient and in many cases earning more than their partners.

The first time a brilliant Englishman took a (very beautiful and posh) girl out to a restaurant in Chelsea, it cost him everything he had in the bank at the time, but he would have been mortified if she had offered to pay. She didn’t, but she sensed that he was broke and he never got another date. As she said: “If he’s not better off than I am, then why am I dating him? And don’t quote me. It might ruin my chances of marrying a rich man.”

So here’s a safe piece of advice, boys. When in doubt, forget Hamlet and pull out the credit card.

Read this article as a PDF.