Why I’ve stopped reading the news 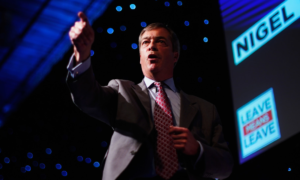 Doom descended pre-dawn on 24th June 2016, and the existential angst hasn’t lifted since the referendum result. A few months earlier, I thought we had hit rock bottom when Jeremy Corbyn became the leader of the Labour Party. Then Donald Trump became president, and the Dystopian nightmare became a reality. This year, just when you thought it couldn’t get any worse, it’s reported that thousands of Nazis have been marching on the streets of Berlin doing Hitler salutes.

The world I knew and understood has disappeared. I can’t shake the feeling that I no longer have a stake in society. I feel disengaged and disenfranchised – and I know I am not alone. Many of my friends feel equally alienated and alarmed by a world that has changed so radically, so quickly. It’s as if pieces of a complex puzzle have been thrown in the air and now we wait to see where they fall.

As a journalist who has reported from around the world – and as a citizen with a keen interest in global affairs – I never thought I’d feel physically sick when reading the news. But that’s what it’s come to. Brexit updates make me queasy, and I groan when handed a copy of the Standard. I simply stopped watching Newsnight and listening to Any Questions after the Brexit/Trump double whammy. It’s not that I don’t care what happens – it’s that I know there’s nothing I can do. I feel like Chicken Little running around saying “the sky is falling, the sky is falling”, but the problem is there’s nowhere to go. So I just wait for the sky to fall.

Before Brexit, Britain punched above its weight, and you had a sense of the future. The day after it felt as if we were only hanging on by our fingernails and trying to keep our heads above water. We have become top banana in a banana republic – and one in which antisemitism has reared its ugly head.

Since I moved to London from Toronto many years ago, I’ve heard whispers that antisemitism is back. I’ve looked long and hard for evidence of it, but never found it. I’m Jewish in the same way that I am Canadian, by accident of birth. I am neither religious, practising, nor part of a community. I have visited many Islamic places, including Iraq, Afghanistan, Pakistan and Gaza, and felt comfortable in all of them. Now, I find myself wondering if I will be safe in the UK because Corbynistas and Islamists (not Muslims) spread the racist disease.

I have no sense of the future anymore. Once bricks and mortar were investments as safe as houses, Corbyn threatens to take them away. He says he is a man of principle but he’s about as dishonest a politician as you can find.

It seems timely, too, that there is a new documentary on American essayist, Joan Didion. It inspired me to reread her book, Slouching Towards Bethlehem, in which she explores seismic changes in American society. In it, she chronicles the dissolute counterculture of the Haight-Ashbury of the 1960s where she finds a five-year-old girl who regularly takes acid given to her by her mother. These times seem equally grim, experimental and seminal.

The view from New York, where I was last week, seems different. On the negative side, Americans are polarised and tribalised, not talking to each other and angry. There is a rawness and a hardness to what’s going on in the States which isn’t quite like anything we’ve seen in the UK. It’s a passionate argument over the soul of the country. In some ways, it’s heartening to see. In the UK, we seem more passionate about Donald Trump than we do about our own fate, while we stare into the abyss and stand on the brink of destruction. It’s as if we have decided to kill ourselves and we’re just waiting for the Kool Aid.

Before we drink the Kool Aid, what would a world look like with Corbyn as prime minister, anti-Semitism sanctioned by the state, the isolated UK with no one lining up to trade with us, banks fleeing for Europe, and no more immigrants? Not good, but despite my apocalyptic Cassandra tendencies, I cannot really imagine leaving London, my home for so long, and I can’t quite accept that the situation, political or economic, could force such dramatic changes. After all, even in the 1930s, Oswald Mosley’s Blackshirts never gained any serious traction. Somehow I believe that the UK will find its equilibrium in this topsy-topsy-turvy world.