Toppled in Baghdad, Clueless in Whitehall 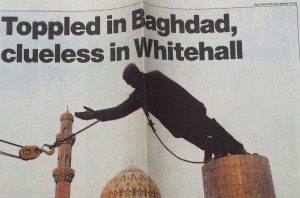 For the first time, the British general at the heart of post-war planning for Iraq tells Heidi Kingstone of the chaos in London and Washington.

In early March 2003, as Britain and America prepared to invade Iraq, a casually dressed Tony Blair unexpectedly walked into the room at 10 Downing Street where Major General Tim Cross had just briefed Alastair Campbell, Blair’s communications chief. Cross was Britain’s point man in Washington on post-war planning and he was not getting a “warm feeling” about it. Campbell was clearly uneasy. For the next half-hour Cross briefed Blair.