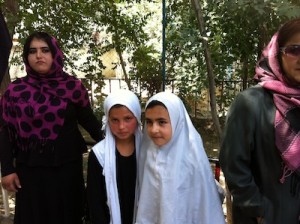 “Sometimes I ask myself if it was my destiny to be born in a country where I, a woman, am considered no better than an animal. Then I answer myself that it is our responsibility as women to change the situation. No one is responsible for our rights except us. This idea gave me the opportunity to be the person I am now.”

When I met Hasina in Kabul in 2007, she not only impressed me with her intelligence, but also with her activism. She wasn’t the stereotype of Afghan women that we have become so familiar with. Like Malala Yousafzai, who recently won the Nobel Peace Prize, she impressed me with her desire to fight for women’s rights and her belief in grassroots movements as the most effective tool for change.

Systems are notoriously difficult to influence as women in the west and elsewhere found out in their struggle for equality, but it happened. Women in Afghanistan suffer from living in the worst country in the world in which to be a woman. With the drawdown imminent, women are worried about what will happen to the very limited gains made when the west is no longer interested. While there is some light on the horizon, it’s a grim picture overall, but perhaps remarkable young women like Malala and Hasina will be that impetus for real change.

100 People, 100 Places are a series of short dispatches to complement my latest book, Dispatches from the Kabul Café (Advance Editions, 2014)