The Rory I knew 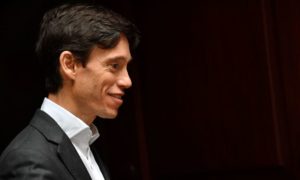 The first time I met Rory Stewart was in Afghanistan at a dinner party held in the house where I was living. I had just arrived in Kabul and had no idea who this odd, lanky Brit was. But I have two vivid memories of that evening. One was how much Stewart looked like the poster boy of an American humour magazine called MAD. It was as if Alfred E. Neuman was sitting across from me. After that, I could never really take him seriously, although he is a very earnest person indeed. My other memory is that I had bought an emerald necklace, which I was wearing. Outside the winter temperature in February 2007 fell well below zero, inside the heat was on full blast, making the room almost tropical, and, inevitably, much to my horror, the green dye from my emeralds dripped down my neck. Oh, well, lesson learned.

I never quite got a handle on Rory who had walked across Afghanistan and reminded me of some bizarre old-world Colonial figure. Walking across countries and continents seems to be a peculiarly British peculiarity, which he not only exemplifies but also exploits. He is the ultimate Etonian eccentric.

There were rumours then that he was MI6. Everyone tried to figure out if that was true. But at that time in Afganistan, everyone thought everyone else was a spy. Since then, I have been reliably informed that Stewart wasn’t one, and of course, he has denied it, but he did seem the type anyway: he wafted everywhere, like Where’s Wally.

However, Turquoise Mountain, the organisation he ran, was known as the School of Toffs and Spooks. It was full of posh young women and men, whose families no doubt once ran the Empire, and there was a slight hangover of entitlement, privilege and self-importance, despite some of the excellent work that they did and continue to do. Turquoise Mountain recruited the very talented British jeweller Pippa Small to design and teach Afghans. I remember loving the line so much that I had a package delivered to my house so when I returned to Kabul, it would be there.

Bizarrely, or so it seemed to me, Stewart seemed to be an object of desire, and many women were thought to have done the ‘walk of shame’. Everyone believed he would end up with a typical, well-bred horsey, upper-class girl, not someone like the woman he married, an Amazonian American who left her husband for Stewart, who she met at Turquoise Mountain, an organisation she now runs.

Stewart, for all his flaws and virtues, is brilliant, and also a brilliant self-publicist. Turquoise Mountain was an enterprise started by Prince Charles, but it gave the talented Mr Stewart an excellent platform from which to heighten his already heightened image, especially in a country at the centre of world news.

My sense of Stewart is that he is a man with a mission. He has a vision of himself, dressed up as Lawrence of Arabia or of Belgravia, and as a leader. He may not have made the grade this time, but will be imprinted, from now on, on our national consciousness, and he may yet get the main prize in time.