The road to redemption 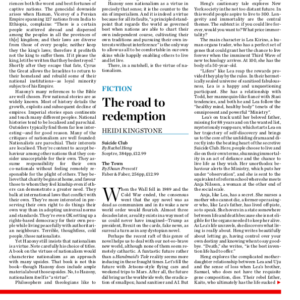 When the Wall fell in 1989 and the Cold War ended, the consensus went that the spy novel was as dead as communism and in its wake a new world order would flourish. Almost three decades later, a reality exists in a way most of us could never have imagined—Trump as president, Brexit on the cards, fake news, as surreal a turn as in any dystopian novel.

Perhaps the recent raft of this genre of novel helps us to deal with our not-so-brave new world, although none of them seem remotely cathartic. A funtastic future rather than a Handmaid’s Tale reality seems more inducing in these fraught times. Let’s fill the future with Jetsons-style flying cars and weekend trips to Mars. After all, the future did bring us the worldwide web; the eradication of smallpox; hand sanitiser and AI. But the Orwellian Big Brother society haunts us, and Tom Wolfe’s “social X-rays” from The Bonfire of the Vanities are still the aspiration.

While very different novels, neither Rachel Heng’s Suicide Club nor Shaun Prescott’s The Town maps out worlds that seem in any way inviting, although the better book of the two by a country mile/kilometre is Heng’s debut novel. Both, however, catch the zeitgeist of our troubling times.

Heng’s cautionary tale explores New York society in the not too distant future. In this world people aspire to live to 300. Longevity and immortality are the central themes. The subtext is: if you could live forever, would you want to? What price immortality?

The main character is Lea Kirino, a human organs trader, who has a perfect set of genes that could grant her the chance to live forever when the imminent Third Wave of new technology arrives. At 100, she has the body of a 50-year-old.

“Lifers” like Lea reap the rewards provided they play by the rules. In their hermetically sealed universe of sanitised fabulousness, Lea is a happy and unquestioning participant. She has a relationship with Todd, her mannequin-like fiancé with Stasi tendencies, and both he and Lea follow the “healthy mind, healthy body” tenets of the omnipresent and powerful “Ministry”.

Lea’s on track until her beloved father, missing for 88 years and on the wanted list, mysteriously reappears, which starts Lea on her trajectory of self-discovery and brings us to the core of the unfolding drama and di- rectly into the beating heart of the secretive Suicide Club. Here, people choose to live and die on their own terms, shunning immortality in an act of defiance and the chance to live life as they wish. Her unorthodox behaviour alerts the Ministry, which puts her under “observation”, and she is sent to the equivalent of reform school where she meets Anja Nilsson, a woman at the other end of the social scale.

Anja, like Lea, has a secret. She nurses a mother who cannot die, a former opera singer who, like Lea’s father, has lived off-piste, so to speak. She hovers in a state somewhere between life and death because she is not eligible for the organs needed to keep her alive. As Lea’s life unravels, she discovers what living is really about. Heng writes beautifully about letting go, having control over your own destiny and knowing when to say goodbye. “Death,” she writes, “is the best invention life had to offer.”

Heng explores the complicated mother-daughter relationship between Lea and Uju and the sense of loss when Lea’s brother, Samuel, who does not have the requisite gene composition, dies. Their rebel father, Kaito, who ultimately has the life sucked out of him, opts for “trad food”—hamburgers and fried chicken, both on the banned list—instead of the prescribed tasteless, life-enhancing liquid nutripacks.

Singapore-born Heng, who is not yet 30, explores her real-life obsession with loss, fear of death and mortality in Suicide Club, and takes a long, hard look at the American obsession with the wellness culture, the notion of perfection, and the social hierarchy where the chosen are thin, beautiful, privileged, competitive and antiseptic.

Suicide Club is a very good story, and Heng writes like a dream about of the tri- umph of love and the benefit of not playing by the rules. In their search for meaning, her characters reject conformity for individuality and freedom.

Perhaps our world is not so bad.

While Suicide Club engages the read- er until the last word, The Town’s final sentence is one of the few that engaged me at all: “No town continues to be just a town. No answer remains true to the end.” There is something lyrical in those lines but the story, the characters and the message fall short. The final paragraph was the highlight of the book and not only because it marked the end.

The Town is Australian writer Shaun Prescott’s first novel and from the opening page I didn’t care. I didn’t like Prescott’s style of writing. I found it pedestrian, prosaic and repetitive. It’s a dull story whose characters I hoped would disappear into the epidemic of multiple holes that mysteriously appeared in the nameless town where the nameless narrator arrives to begin research for his book on the disappearing towns of the central west of New South Wales.

I get the existential overtones, the philosophical questions, the intellectual prying and the metaphysical entreaties, the angst and ennui, and agree with the character who says that no one is interested in disappearing towns. I read the book twice to make sure I didn’t like it, and channelled my inner Kafka to boot. Still no luck.

The narrator meets a cast of unengaging characters, including Ciara, a sort of love in- terest who runs a radio station that no one listens to where she plays music no one wants to hear. When Ciara remarks that “she didn’t live among the people, only witnessed them like through a pane of glass,” it just seemed to have overt overtones of Tennyson’s The Lady of Shalott.

Jenny runs an empty pub that no one other than the narrator ever frequents, which makes me think it should just close. Then there is the ill-fated Rick, who strug- gles with growing up. He tries valiantly not to engage in adult life, and then does. What happens to him is the most interesting, em- pathetic and dramatic part of the story. I warmed to pathetic Rick for his love of the safety he finds within the confines of super- markets, “unable to see life beyond them”. Rick likes them for their lack of uniqueness. “Woolworths was an embassy for nowhere and everywhere.” Another character, Tom, drives an empty bus around and around the town in pointless absurdity.

It is a novel about belonging, about who belongs, about colonial genocide, resistance, arriving, finding your place in society. Frustratingly, Prescott writes some truly wonderful sentences: “They all thought themselves as belonging to this cherished destitution, via the frayed threads of a mysterious continuum.” You end up wishing the whole book was written with such flair. “But it was another town on the road to some other town, or maybe a city, in one of the directions.”

Perhaps The Town will appeal to adolescents struggling with understanding their world and their place in it, or to those who live on the fringes of society like the principal characters.

Both books have redemption as part of their themes, searching for what lies under- neath the surface in shadowy worlds and the need for truth—but these are the only things they have in common. I wish I liked Prescott’s book, which would have made a better short story, but then I would have given Game of Thrones a thumb’s down so, perhaps, de gustibus non est disputandum.