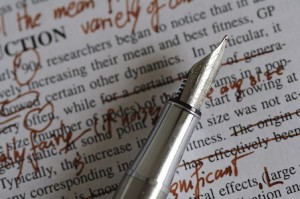 This article originally appeared on “What’s New in Publishing?”

I immediately liked the idea of AdvanceEditions when Hector Macdonald pitched his concept of crowd-editing to me. It might have something to do with the fact that I have spent my entire professional life as a journalist and so am intimately acquainted with the process, but it was more than that.

Crowd-editing is an innovative concept where readers get to interact with writers, an idea dreamed up by the Oxford-educated zoologist, Kenyan-born Macdonald. It intrigued me enough to agree to be AdvanceEditions launch author.

The process begins at the beginning as does any manuscript, by much editing and hand-wringing. By the time my e-book was uploaded onto the AdvanceEditions.com site and Amazon and Barnes & Noble, it had been professionally edited, proofread and scrutinised and was as honed as any racehorse. What readers read is highly polished, and not a work in progress.

Since Hector launched AdvanceEditions.com on September 23, 2014, many readers have made valuable contributions to improve my book, Dispatches from the Kabul Café, about the 18-months I spent living and working as a reporter in Afghanistan.

What AdvanceEditions offers, which works for both readers and writers, is the chance to make the book better by getting people to make suggestions, add comments, post observations and find any glaring errors.

On December 23rd, the site will close for comment, although the books will still be available. Then, the process starts again until the final version comes out as both an e-book and a print edition in the spring.

The first step after the book goes live (it is also available at the same time to download as an e-book from Amazon and Barnes and Noble for £1.99) is to register on the site. Then you are free to comment and start a discussion.  It’s akin to having reviews and critiques but where you can actually use that information.

In Dispatches I write about the Kabubble, the crazy expat world of drinking, partying, locationships, hard work, and the love of this beautiful country and its people. It’s also about the juxtaposition of that louche world and the Afghan reality. It’s the poorest country outside of sub-Saharan Africa, food shortage is a reality for much of the population, and corruption is the cancer that has eaten away at any real chance for progress. It’s a socially conservative society that came face to face the alien cultures we imported, for better or worse.

One of the earliest comments on the site suggested I write more about the places I mention, one of which is a French restaurant I went to on my first night in Kabul in 2007. L’Atmosphere had a huge garden, a swimming pool, as well as terrible food, which was notoriously expensive. I love writing about these spots because it was a unique time in Kabul, and a crossroads in Afghan history. It is also a world quickly disappearing as aid money is diverted to other more pressing places, the military mission has ended and the world has moved on to new conflict zones.

But the thought was a good one. I can see the roses in the spring and the blue skies and the people who went there regularly, and I like the idea of sharing more of that with the readers.

Someone else wanted to know about the dogs I lived with in Kabul, who make cameo appearances and will now have staring roles. For me these suggestions will enhance the book, and much like when you get your copy back on a newspaper or magazine after five different editors have trawled all over your work.  In this case I am the final arbiter, nobody edits it or writes it except me, and I only consider ideas that I like.

Hector’s book, Rogue Elements, is a brilliant spy thriller, every bit as dark and dirty as you would expect of the world of espionage.  Not only is Hector extremely clever, he is also a through researcher and his facts and the storyline were more than plausible and kept me turning the pages.

Despite this a number or readers and experts in the fields of military history, intelligence and drug reform made hugely valuable suggestions.  The Canadian secret services (CSIS) has a significant presence in the book, and as I was born in Montreal, I felt able to put in my own nickel’s worth and boldly tell my publisher that a Canadian would say ‘eh’ rather than ‘huh’.

Clearly, this is not a platform for everyone, but I am a sucker for new ideas and am always open for the possibility of making my oeuvre as good as possible. The process in journalism of having your work edited was never painful if the article turned out to be better, but horrible when it wasn’t. Just like the time I first started as a reporter and I was sent out with a terrible wig to cover my brown hair to see if blondes really do have more fun. I wrote they did not so was horrified when I read my double page spread the next day in the Daily Mail only to discover that I had wanted to be a blonde since babyhood. When Dispatches comes out in print and is back as an e-book, there will be no nasty surprises, only an even better version, and a happy writer and publisher.