Our obsession with body image has got to end 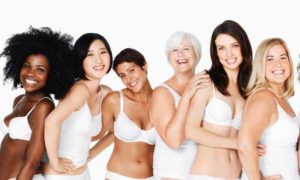 Flesh is everywhere. More and more of it is on show because fat is the new thin, naked is the new look, and we’re all obsessed about body image. Being honest about weight is still an issue, as both Boris Johnson and I know only too well.

Remember our potential future prime minister as he dangled mid-air from a zip wire over Victoria Park, making his Olympic debut in 2012? Dominic Lawson wrote in the Sunday Times last week that one of Boris’s aides had revealed that he had lied about his weight: “Or let’s say that he had neglected to tell the zip-wire operators the full truth about his poundage, which they needed to know to set it at the appropriate tension.”

On this, I commiserate. A few years ago, I decided to rekindle my skiing career when friends invited me to spend a few days with them in Megeve. I hadn’t skied in years and wore skiwear that had the effect of making me look like the Michelin man, while my friends, both excellent skiers, looked chic and elegant.

It also felt as if I hadn’t hot-dogged down the hills since skis were made of wood. As I didn’t have my own, I had to rent – and was asked my weight by the man at the ski shop. I was taken aback, and with my friends standing right next to me, like Boris, I may have lopped off some poundage myself. It’s all about self-respect, after all.

I am sure it was just a kilo or two, nothing major, a pound here or there. In my shocked state, how did I know what the consequences would be? But consequences there were, especially as control on the hills was never my strong point, and I have traumatic memories of someone calling out ‘kamikaze’ as I zoomed down the icy mountainside as a child. Having the wrong skis in France did not make matters any better, I can assure you. It was a homicidal, suicidal mission; luckily, there were no casualties. “I thought you could ski,” said my friend. It sounded better in French.

In the beauty parade of politicians plaguing us in the run-up to replacing Theresa May, image is crucial. No wonder it’s hard for people to be honest about their vital statistics.

The Tories give you quite an excellent lineup of men and women. Boris’s new girlfriend has whipped him into shape, and he’s somewhat more svelte. Stick thin Theresa May would never lie about her weight. We now have to digest our breakfast with images of Michael Gove in his running gear, and Dominic Raab is a martial arts freak.

While models remain reed thin, real-life people tell us we need to love our rolls. Real women in the Dove ad dominate Piccadilly Circus, where the 17.5 metre-high billboard illuminates plus-size women in underwear. Lena Dunham has three million Twitter followers. The actress and writer recently posted a picture of her unclothed body because she ‘loves being naked’. She’s somewhat rolly and proud of it. The iconic Soho pub, the Coach and Horses, now has a nudist licence where staff and guests can roam naked. And there is the incomprehensible naked cycle ride through London. The ultimate nightmare.

The Germans have long embraced nakedness. It always struck me as peculiar that their newscasts and news magazine covers had naked people on them. That, however, didn’t prepare me for a sauna in Berlin. I walked in swaddled in a large towel that covered everything apart from my feet. The naked others gawked at me as if I was from some parallel universe. Unfazed, I sat and sweated, alone, in my towel.

So should you be thin or fat? Should you embrace your rolls, if you have them, or your ribs if they are protruding. In Mauritania, young women consume 16,000 calories a day, force-fed by food pushers fattening them up for marriage. That’s more calories than most Western women roughly consume in eight days, because men find the large rolls of fat erotic. Women can’t move, and they feel sick. On the other hand, imprinted on the mind of anyone who has ever read Tom Wolfe’s seminal 1987 book, The Bonfire of the Vanities, is the New York Social X-Ray, where you can never be too rich or too thin.

Either way, the message is to love yourself. Yuck. Weight and image are fraught with societal, cultural and emotional dynamite. We know this, and it is progressive that we can learn to embrace new representations of physical perfection. I’m all for the burqa.