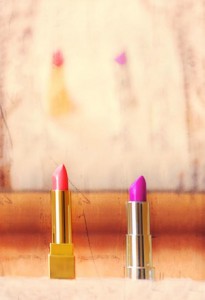 I am delighted to be featured as the lead piece on this month’s Visual Verse. To paraphrase Visual Verse, they are both collaboration, celebration and challenge – every month, an image is selected by Visual Verse and writers are invited to submit their own interpretation – be it poetry or prose.

My piece, Liberation, is written in response to a work from the Welsh photographer Jean Gill. It’s also the first non-fiction lead piece from Visual Verse, and I used the image of the two lipsticks to sketch out some of the ideas behind my time in Kabul, writing about women’s rights.

An excerpt is here, but you can read the full piece on Visual Verse – and contribute your own.

In 2007, on my first assignment to Kabul, a woman at the office where I worked asked me for nail polish. Her skin was weathered and her clothes worn. We couldn’t communicate in any common language except perhaps the universal language women speak. She pointed to my painted nails, then to her nails. The next day she had her red nail polish.

As a journalist, I was based in Afghanistan for 18-months (over a four-year period), and during this time the ‘issue of women’ became something of a passion for me. I wanted to write about the suffering so many women endured because of endemic domestic violence. I wrote about why they stayed and the diabolical circumstances that conspired to keep them in homes and with families that abuse them.

The explanations are, of course, complicated, and one reason is that the solution is often no better than the problem. If women are illiterate, which almost 90 per cent in Afghanistan are, unskilled, dependent, leaving can mean total alienation where they are separated from their children, ostracised by their communities and rejected by families who do not want them back. Luckily, there are some safe houses, but that is also only a temporary solution.