It’s great that celebs like Angelina Jolie want to help the poor. But how useful are their visits to Africa? 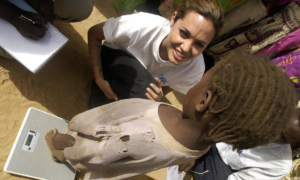 It’s a classic image: a movie star, often but not always white, smiles benevolently as little black African children grin back. A phalanx of imposing-looking military minders in flak jackets holding machine guns protect the VIP, while, inevitably, a local woman with an oversized sack balanced on her head completes the photo op. Behind the breezy pictures, an army of professionals has worked to ensure a flawless, seamless, spontaneous, natural hour and a half of international attention. Not one word is unscripted, not one movement is unplanned, not one refugee is random, every second of the agenda is orchestrated. Events are as tightly controlled as any Hollywood production.

Celebrities bestriding the global stage shedding light on benighted peoples is nothing new. American magazine, Mother Jones, published an ironic map of the African countries celebrities have designated as their own: Richard Branson, Oprah and Will Smith have South Africa, George Clooney is for Sudan, Kim Kardashian champions Botswana. Stars for poverty equals good personal branding, but complex, multi-layered issues are often unhelpfully unpicked and reduced to a single soundbite to raise money. What’s more, high-level people require meticulous management, which is usually about their own image, and not the issues at stake.

Few make it look more natural than one of the ultimate A-listers, Angelina Jolie. On a visit to Kenya to witness British military training against sexual violence, Jolie was surrounded by alpha male peacekeepers trying to impress her. Not taking any crap, she turned to the only woman there, Nicola Dahrendorf, to ask her opinion of what was needed on the ground. “That not only impressed me but endeared her to me,” says the international humanitarian and human rights advisor.

Despite Jolie’s involvement, knowledge and commitment, the simple message that rape should not be used as a weapon of war does not capture the social, economic, political and power dynamics which make these women’s lives so difficult. “People love to idealise pre-conflict communities,” says Dahrendorf. “but the problem is that it’s politically incorrect to say that women were mistreated in certain communities in these countries. Not all communities are the same, and it’s highly nuanced because there are different practices across a single country. It’s not incorrect to say that rape is a consequence of war, but women were often victims of violence before. There are communities where women who were raped were married off to their rapist to keep communal peace. You need to analyse the dynamics in these communities pre, post and during the conflict,” she says. “That’s the problem when it’s a piecemeal approach. It only looks at a slice of the pie and conflict is a complex, multi-layered pie.”

Success is the payoff of weeks or months of hard graft. Celebrities have teams and scripts pass through multiple hands until it finally reaches someone like Jolie, who then amends it and sends it back. As an actor and activist, she will take the script and make it her own, inserting her own stories, and it can be tweaked over and over. “They want to own the story and the tragedy,” says Dahrendorf, who has briefed Jolie.

It doesn’t end there. Every minute is scripted literally down to the second, from when they get off the helicopter to when they turn left or right or shake someone’s hand. The security detail is organised, the menu has to be chosen, along with the appointed dignitaries who will meet the star. Then there is transport, which could include the chartering of a private plane, and accommodating the entourage because an entourage means you’re important. Finally, the refugees or survivors have to be chosen. One or two individuals, who are supposedly emblematic, are picked to highlight the cause and meet the stars. Dahrendorf remembers having to scramble round to find a rape victim for a U.N. Secretary General’s visit. It was difficult because often women don’t want to talk about the horrible things that have happened to them.

Politicians and generals require the same level of management. Heidi Meyer, a former Control Officer at the Department of Defence, advised both former Secretaries of Defence Robert Gates and Donald Rumsfeld on Afghan policy. There would be briefing meetings to determine the talking points, which would have to pass through three to four different departments at the Pentagon at several different levels before the Secretary of Defence would ultimately give his approval. This could take months.“It’s a challenging thing to get everyone’s talking point in the script as we all want the SecDef to talk about our agenda and issue, but he has limited time and priorities, of course.” One thing is sure, whenever a senior US official makes a public statement, it carries serious weight, and so words cannot be uttered without very careful deliberation and immense planning and scrutiny by staff. Every word is carefully thought through and designed to win policy support or to underscore a policy decision. So for US government institutions, a senior figure can make a difference despite the immense amount of work that goes into preparing the message.

But does that hold for a celebrity who chooses to be the face of a charity or aid organisation? The  debate continues about the efficacy of these visits. “It’s weeks or months of work, and when it’s over, what’s the value added,” asks Dahrendorf? “I genuinely don’t know.” Many people enjoy doing good, and highlighting causes and situations remain essential, but sometimes it’s difficult to separate the ego from the need.