Israeli elections, Justin Trudeau and the meaning of inclusivity 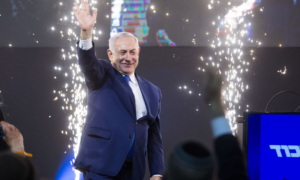 Quite possibly the best thing to come out of the Israeli elections is the brilliant quote by an Israeli journalist, “To Bibi or Not To Bibi”. The spectre of the elections pales in comparison to Brexit; both were pretty much off the menu at this week’s Muslim News Awards for Excellence, which I attended.

There were several themes. One, of course, and rightly, was the positive impact the Muslim community has: whether the surgeon honoured for his amazing internationally recognised work, the female artist who has won prestigious prizes around the world, or the 12-year girl who brought home gold several times in martial arts competitions. The MC was a glamorous TV presenter who was brilliantly funny and pro-female empowerment.

In her speech, she talked about how Muslim parents tell their kids how everything was invented in the Arab world, a universal theme, brilliantly depicted in My Big Fat Greek Wedding. The father in the movie spends his whole time regaling his family and anyone who would listen that everything is Greek.

The Mayor of London, as always, was inclusive, although a short debate arose about his 2016 acceptance speech which he gave at a synagogue. As someone who grew up with the Miss Universe view of the world, in which all people are the same regardless of creed or colour, it impressed me. Whether I’m writing about Rwanda, antisemitism Islamophobia or anti-Christian sentiment, the words are always the same – as is the message of dehumanisation. The Hutus called the Tutsis cockroaches; the Nazi referred to the Jews as vermin; racists called black people monkeys.

My neighbour at the table, a solicitor advising Muslim charities, discussed the rise of hate crime targeted towards Muslims since 9/11, and the intensifying of Islamophobia. He noticed that government involvement had decreased since the Blair and Brown years.

Mosques and Muslim schools now need protection, a sad indictment of the state of affairs, but there seemed no knowledge that synagogues and Jewish schools have had to have protection for years, if not decades. Some Christian schools in India now also need protection, and there are virtually no Christians left in Iraq, for example. The themes echoed the ones I had heard at lunch with the chairman of the Board of Deputies a few weeks ago: our communities are under attack and we need protection.

What is so intriguing about hate crimes here and in Middle East are the parallels. Which brings us to Canada and the Israeli elections. I was born in Montreal and grew up in Toronto. Justin Trudeau has put my people back on the map (sort of as it remains a country that few people know about).

His government is inclusive, which many applaud. All was going well last night, with feelings of comradeship, equality and the spreading of peace and love. Then, a young man who praised Justin Trudeau added that the PM’s major flaw was his support of Israel. Groan.

That, I suppose, brings up the question of our time. What does it mean to be inclusive? Inclusive should mean inclusive, with no exceptions. There’s a long way to go.