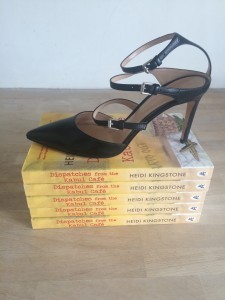 This week I’m so excited to be talking to Canadian journalist & foreign correspondent, Heidi Kingstone… about her work, life, shoe passion and her fab book about her encounters when based in Kabul in 2007/2008 – “Dispatches From The Kabul Cafe”.  Hi Heidi…

Hi!  My name is Heidi, and I’ve been a journalist all my life.  I have finally written my first book, Dispatches from the Kabul Cafe, which is about expat life in Kabul, a place known as the ‘Kabubble’. I like to think of it as the Afghan version of the TV series Indian Summers. I spent 18-months living and working there and discovered an amazing world. The country is fantastically beautiful, and life is complex and difficult, a place where so many people have felt drawn in order to help, and Dispatches is about the adrenalin-fuelled excitement of living on the edge of someone else’s war. You don’t have to like politics, be interested in war or even Afghanistan. Dispatches is a series of stories, based fairly accurately on real-life, on things that happened to me or my friends, where you can find answers to questions like: Where can you buy 913 Kalashnikovs? How do you tell a friend her expat love is never coming back? What’s it like to date a mercenary?

Your book, Dispatches From The Kabul Cafe, published by Advance Editions, was launched in May 2015. It is based on your encounters and interviews with idealists, gunrunners, warlords, generals, power-brokers, fashionistas and ordinary women over a period of 4 years from 2007 when you lived and worked in Afghanistan. Described by many to be a travel book written in the style of traditional 19th/20th travel writers like Fielding, Sterne, Morris, Thesiger and Kinglake – and I agree, it is an armchair traveller’s literature delight! What or who inspired you to write your experiences in this way?

As usual, it was a series of events, triggered by my father, a psychiatrist, who suggested I write about daily life in Afghanistan. By this point, the world was suffering from information overload on the military and political front and on the tragedy of women’s lives, but there were still other aspects that I felt hadn’t been covered. Daily life in the ‘Kabubble’ fascinated me and rounded out the picture. As a result, the book grew organically into what it is, which is a series of vignettes based fairly accurately on real life. I wanted to write something atmospheric that gave the reader a sense of what it was like to be in this adrenalin-fuelled world where truth is stranger than fiction. Even though my book is nothing like his, I loved Graham Greene’s The Quiet American, which was about Vietnam during the French Indochina War in the 50s. It was a turbulent and historic period, and the louche expat scene of foreign correspondents, women, drugs and diplomacy was my inspiration. In The Karen Woo Story, you get some sense of that.

Read the full interview at: http://bootsshoesandfashion.com/dispatches-from-the-kabul-cafe/