Glittering Moscow proves the Russians have left Communism behind them 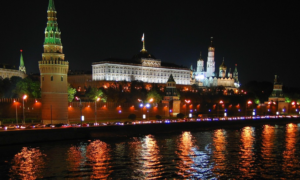 I arrived in Moscow thirty years too late. Except for the five red stars over the Kremlin, any vestige of Communism was obliterated by the time I took my first trip to the Russian Federation in October 2018. I walked from my Stalin-era ‘penthouse’, read over-heated top floor flat, that used to house Party apparatchiks on Tverskaya Street, to Red Square nearby. Tourists headed to the multi-coloured onion domes of Saint Basil’s Cathedral streamed past Lenin’s mausoleum more or less oblivious. Across from his granite tomb stands GUM, a massive department store from the late 19th century with every high-end European designer shop. Vladimir Ilyich’s embalmed body must be spinning at the unadulterated display of wealth at this cathedral of capitalism. It is where I bought two 2019 calendars each with 12 glorious poses of President Putin. I dined at the White Rabbit, one of the twenty best restaurants in the world, and strolled around some of the ex-Soviet Union’s most expensive property in Moscow.  But the only question on my mind was: what happened to the Revolution? It was as if it had never occurred because, in one-hundred years, the wheel has come full circle to such an extent that there was an extensive exhibition of Bulgari jewellery at the Kremlin.

In Moscow, I met my Russian friend, who, despising the politics, now lives abroad. Knowing my Cold War obsession, we caught up with a friend of hers at a Soviet-era cafe, definitely no glamour, where we sat on high stools and ate the best-in-Moscow chebureki, deliciously deadly fried half-moon-shaped pastry filled with potatoes (or cheese or meat), and sipped strong black tea (the kind that could put hair on your chest). They recounted two very different Brezhnev-era versions of their Soviet childhoods.

One is a former Chicago university professor, who moved back from the US to continue her research in Russia. Growing up in a closed city, she and her friends would run free all day, get bags of groceries for a couple of roubles, safely knock on strangers doors if they were hungry or thirsty, had free first-rate education, health care, after-school activities and no worries. No wonder she’s nostalgic for the glorious Soviet past. I would have wanted that idyllic childhood too. No reference to the gulags or the KGB, though. To her, Putin is masculine, has dignity and is making Russia great again.

My Russian friend, also an academic has very different memories and spoke about her husband who grew up in Siberia, one of eleven children, who walked miles to school, rarely had enough to eat and was candid about the notorious disappearances and other nefarious Lubyanka-like activities.

Our conversation touched on WW2 and the fact that approximately 27 million Soviets died. Russians still suffer from those consequences. Ever wonder why you see inevitably rich but troglodyte-looking, track-suit wearing older Russian men with model-thin, designer-clad, kill-you-with-my stiletto heels, much younger Russian women, who carry the most expensive handbags? The former Soviet Union has been predominantly female since then. According to the Pew Research Center, the ratio is currently 86.8 men per 100, with a large percentage of men dying from alcoholism.

I crisscrossed Red Square and routinely visited a $2.000.00 bottle of vodka in a glass replica Kalashnikov, which remained unsold at GUM. There was a much cheaper bottle of vodka in the shape of Sputnik. Now that tempted me. I convinced my friend to go to the Cosmonaut Museum where I was infused with the necessary dose of the Soviet-style I craved, although the Russian school kids, like locusts, bought up everything in the gift shop, particularly the last Yuri Gagarin notebook that I had coveted. But even the rich aren’t shopping as sanctions continue to bite.

Heading out of town about 50-minutes by train to visit an artist, a snapshot of old Russia appeared. The tree-lined lane down which we walked in the cold autumn air might have been the same under the Romanovs, Bolsheviks or Stalinists. The three of us arrived at a book-filled house with an artist’s studio filled with hauntingly beautiful canvases. Lunch in her small kitchen, windows open, consisted of beetroot, herring, chrain (a spicy horseradish paste) and potatoes, followed by a magical delivery of fresh goat’s milk for the freshly brewed coffee. Time seems to have stood still. Amongst many other things was a famous Soviet poster, and two fridge magnets, one of Mao, the other of Stalin.

I did get a further dose of Soviet-era architecture at the 1961 Kremlin State Palace theatre, where I saw the most spectacular production of La Bayadere. As I deem hand sanitiser one of the greatest inventions of the 20th century, it is perhaps not surprising that I loved the cleanliness and organisation in Moscow. And because Russia is so big, the only country bigger than mine, Canada, there is endless space. At the opera, ballet, concerts or museums, checking your coat is mandatory. There are no queues and no cost. Washrooms, unlike those at squashed West End theatres, are spotless and enormous. It’s all so civilised. The performance of La Traviata at the Bolshoi was extraordinary, and the top floor lounge was a paean to exquisite, subtle elegance with Russian champagne and caviar at reasonable prices.

I could imagine what it was like during the Cold War, what a different cast of characters there would have been, although there are still mysterious disappearances. What happened to the Revolution? The Chicago professor said the liberals in the Duma had got rid of all the Soviet markers while the Russians have embraced capitalism with the zealousness of converts. The Russians learned that communism didn’t work. With the spectre of a potential Corbyn government looming in the distance, let’s hope it’s not only the Russians who remember those lessons.