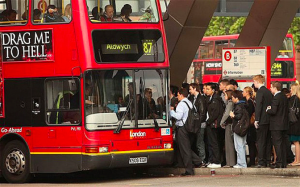 Seeing this London bus the other day oddly drew me right back into my time in Kabul.

In ‘Dispatches’ I write about what was commonly referred to as a ‘locationship’, a relationship that often had more to do with location and circumstance than chemistry, although sometimes they were easily confused.

The two protagonists of the story called ‘The Locationship’, Benazir and Jesus, are in their mid-thirties. They are smart, attractive and committed, and life in Afghanistan’s capital presented them with an enormous variety of opportunity, not only for fun, but also for professional fulfilment, and these experiences, they concluded, would be enhanced by being together.

The gestation period before they finally became a couple involved a very long courtship ritual of many months and initial bliss lead to ultimate disaster. Their intense feelings were volcanically high and equally low.

On one calm weekend they went out and bought the UK-made horror DVD ‘Drag Me To Hell’ to watch together on a romantic Friday night. But with the ups  came the downs, and that afternoon dissipated into a frenzy of recriminations, until Jesus called out from across the room: “Don’t drag me to hell, shag me to hell.” Benazir couldn’t resist. It broke the ice but not the pattern. For a time they were happy again, if only temporarily…before the next eruption.