Doris Day: an unlikely hero for our times 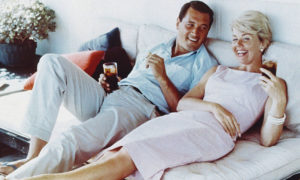 The outpouring of grief over the death of Hollywood icon Doris Day says much about the state of world affairs. It seems as if we long for an era when our universe seemed calmer and more ordered. Hers was an age of innocence, where there was hope for the future. America then, we tell ourselves, was a nation where values prevailed: there was a ‘right’ and a ‘wrong’; where men and women lived happily ever after.

During her heyday, Day was the antithesis of her 1940s, 1950s and 1960s contemporaries, film legends Sophia Loren and Marilyn Monroe. Day was the perky, wholesome American, the girl next door, slightly goofy with no sex appeal  — and was always the chaste eternal (middle aged) virgin.

She died on Monday, 13 May, and at 97. She had had a full and remarkable life as a great singer and actor with a vast number of film credits to her name. She was firmly embedded in the American imagination, despite keeping a very low profile over the past three decades.

Her continuing legion of famous fans tweeted about the impact she had had on their lives, from Antonio Banderas to William Shatner. Paul McCartney was a friend, and his daughter, designer Stella, wrote: ”The one, the only, the woman who inspired so much of what I do… Doris Day I love you, my Calamity Jane. An iconic woman who I was hugely honoured to meet and share precious moments with. Rest in peace x.”

Her real life was a complete contrast to her film persona. She married four times, divorced three times, was a widow, lost her only child to cancer in 2004, had a nervous breakdown, and her third husband bankrupted her. Not surprising that she turned to animal welfare and animal welfare lobbying organisations, including the Doris Day Animal League and the Doris Day Animal Foundation.

Zsa Zsa Gabor,  a film star from the same era said: she “never hated a man enough to give him his diamonds back.” Day revealed that “the more I study human beings, the more I love animals.”

Doris Day seems an unlikely hero for our times, but something about her authenticity resonates.

She was right on the money when she sang Que Sera Sera. Whatever will be will be.