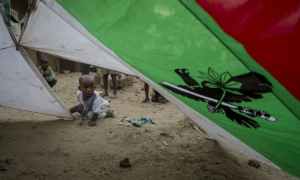 There’s not a celebrity in sight to champion the world’s most undervalued humanitarian crisis in the world. Never heard of Burundi? Not surprising.

The statistics make you want to weep. It’s ranked last in the World Happiness Report. It’s the second most impoverished nation on earth, with over 70 per cent of the population living below the poverty line surviving on just $339 a year. Consider that a hamburger in Luanda, Angola (the world’s most expensive city for expats) halfway across the continent, costs $46.00. Even the international donors of the landlocked county aren’t interested in Burundi, which also has the world’s worst rates of malnutrition and hunger.

There are few strategic interests in Burundi, other than humanitarian, but it doesn’t grab headlines as the biggest or newest crisis. Donors are reluctant to invest in improving the economy because they don’t support the current regime. But small amounts of humanitarian aid only go so far.

Known for its corruption, crimes against humanity, deforestation, weak infrastructure, lack of health care, poverty, and a few footballers, Burundi is one of African’s smallest countries. It borders Rwanda, Tanzania, the Democratic Republic of the Congo, and got its independence from Belgium in 1962.

Burundi sometimes hits the headlines when genocide threatens, which it did in 1972. That inter-tribal conflict led to the death of between 80,000 – 210,000 civilians.

In 1993, Melchior Ndadaye, leader of the Hutu-dominated Front for Democracy in Burundi was assassinated. Approximately another 300,000 civilians died.

On the evening of 6th April 1994, a plane with the presidents of both Burundi and Rwanda was shot down, and so began the 100-day genocide in Rwanda. One million Tutsis and moderate Hutus were slaughtered.

Another genocide threatened Burundi in 2015 when the President announced his intention to run for a third term in office, which many saw as a violation of the peace accords that ended the 1990s civil war. It didn’t materialise, but there were disappearances and violent crackdowns on street protests.

Burundi, for all its lack of resources, is a police state where the local militia (the Imbonerakure), and the youth wing of the ruling party patrol every street corner.

The world is not entirely impassive when it comes to caring about Africa, but its interest is political, strategic and economic. Nigeria is rich in petrol. DR Congo is a complex country riven by conflict, but it has heaps of minerals. Coltan powers our electronic devices, not least our mobile phones. Burundi is only replete with refugees.

The UNHCR slogan says that every year refugees walk over 2 billion km to safety. Hundreds of thousands of beleaguered Burundians have sought refuge in Tanzania and other neighbouring states. Some have returned home on a near-suicidal mission as a result of international donors failing to provide the promised funding. Desperate Burundians often don’t have enough to eat in the refugee camps.

Rwanda turned things around with visionary leadership and significant investment from international donors sympathetic to the post-genocide government.

Solutions for Burundi? Few and far between. A regional dialogue with pressure on the Burundian government to talk to the opposition in exile. There is an official domestic opposition as well inside the country, but it is not entirely representative. An inclusive election in 2020 with free and fair elections could entice donors to support economic recovery.