Afghanistan: Myth of the Splendid Sisterhood 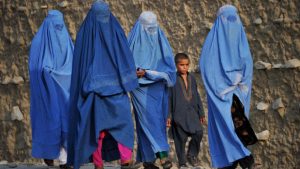 First published by Mantraya on 14 October 2016

Stories of abuse and the mutilation of women in Afghanistan are so common we are almost desensitised to it. Violence against women and particularly domestic violence has fed the headlines certainly since our recent escapade into the country, one attack more horrific than the next.

Male abuse in countries such as Afghanistan has spawned laws, reports, column inches, books, movies and documentaries and ultimately resulted in the International Day Against Violence Against Women on 25 November. Yet violence against women isn’t solely a male preserve.

It is estimated that about a third of attacks in the home in Afghanistan are perpetrated by women against other women.

Writing about the violence women perpetrate against other women stays below the radar. Its exposure seems like such a betrayal. It also complicates the narrative of violence against women being a story of male perpetrators and female victims, but it’s part of a whole spectrum of gender-based violence that doesn’t get written about and goes against mainstream thought.

The main culprits are mothers-in-law and to a lesser extent sisters-in-law and other female relatives in extended family households, women who have themselves been dominated, abused and disenfranchised.

Violence against women and girls is related to their lack of power and control, as well as to the social norms that prescribe men and women’s roles in society and condone abuse. These factors reinforce women’s low status in society.

One horrific story propelled me to research this article. Several months ago in an area east of Jalalabad, Afghanistan, a 15-year old girl died after her sister-in-law threw her into a tandoori oven. In yet another gruesome account in Afghanistan, a pregnant woman in her twenties had part of her genitals cut off. Her mother-in-law and sister–in–law helped her husband tie her up and beat her with a wooden stick. She miscarried.

“In situations where girls marry young and go directly from their birth household to their marriage household, they will have little experience with the outside world,” says Lauryn Oates.

As the programmes director for Canadian Women for Women in Afghanistan, Oates has spent 13 years going in and out of the country. Her analysis is that when young women enter the new household they do so at the bottom of the rung. “They have no negotiation skills, no agency, and their ‘purity’ is prized but the price of this purity (having had no interactions with males outside the family) is that she has no education, no life experience, no worldliness, and no status,” she says. “The situation is one set up for abuse, and she may have cost money (if there was a bride prize), fuelling further resentment.” These are draws for violence.

“Domestic violence is an unfortunate part of the Afghan society and it takes place everywhere in the country in different ways.  Women, in particular, are the largest victims of domestic violence and often women become a cause for violence against other women for various reasons,” says Quhramaana Kakar,  Founder and Director of the NGO, Women for Peace and Participation (and gender adviser to the Afghan Peace and Reintegration Programme and Joint Secretariat of the High Peace). “In the house women are forced to live together and share responsibilities. Limited mobility and freedom of expression make other women easy targets of their own frustrations and where they can seek revenge of their own insecurities.”

In Afghan society, patriarchy is created by men while guarded by women.

Afghanistan, India, Central Asia as well as many other male-dominated cultures that share the same structures to which women adhere, makes them think and act like men in terms of power and control. When the mother-in-law was a victim she justifies her position of perpetrating such violence toward her daughter-in-law.  “Thus, the women help in continuing the patriarchal system once they come to occupy positions of power in household or politics,” says Dr Shanthie D’Souza,  president and founder of Mantraya, an independent web-based research forum. “Moreover, they continue with such measures to gain some amount of respect in their society where power is measured through control and subjugation among peers and men.”

On my first trip to Kabul in 2007, I became aware of Sippi Azarbaijani-Moghaddam’s legendary reputation as one of the foremost experts on Afghanistan. I met her shortly after and her insights and advice remain amongst the best. As a gender expert, she has worked in the country for over twenty years and doesn’t mince her words when it comes to explanations:

“power, powerlessness, lack of education, no rule of law, socialization into violence, acting out what has been done to them as children, shame, shame and more shame. With shame on top so victims and perpetrators are stuck in a bond of silence.”

“Women are the most ‘stuck’ in the cultural systems,” says Azerbaijani-Mogaddam. “Older women are rewarded by men for maintaining the cultural system so they punish transgressors. There is also jealousy when younger women come into the household and get more attention from men, and during war, violence at all levels of society escalates. Everyone, given the chance, is violent to everyone – hitting, sodomy, rape, sexual abuse, verbal abuse. It is a hierarchical society where many social norms have been broken down by war. Men are also stuck in the system and feel trapped to do anything but what is expected of them to maintain ‘face’.”

The low status of women in Afghanistan has been a main focus for the international community when the term ‘gender’ replaced the word for ‘women’. There emerged a discourse on women’s rights, centred on the goal of catapulting women from purdah and isolation to the spotlight with economic freedom and other rights. Gender mainstreaming seemed like a new great approach to change and challenge the dynamic of the cultural norms; and to the credit of its champions, was genuinely fuelled by the desire to make a difference. What happened was enormously different from the original intention.

“The first approach was called: Women in Development,” says Oates. “The idea was that special attention would be paid to help women move up the rungs. This was later superseded by gender mainstreaming where it was determined that the WID approach wasn’t good enough; it separates women and hives off “women’s problems” as if they are unrelated to the wider society. It was determined the low status of women is actually something that is socially constructed by both males and females in the society, so it must be addressed at that level. So ‘gender’ replaces the word ‘women’ and projects must mainstream (integrate) gender considerations into their general projects (as opposed to having separate special projects or activities for women).”

As Oates points out, it sounds good, but there little real expertise exists in how to do this in practice. “Development donors tell implementers: you’re required to mainstream gender in your project. But neither the donor nor the implementer often knows how to do this,” she says. “They just need that box checked. it’s a policy from the top that doesn’t necessarily have a lot of understanding at the implementation level. And from what I’ve seen, donors do not demand that gender mainstreaming strategies are evidence-based.”

Oates has often seen that a project will insist on having “all this GM stuff in the proposal and inception phase – a gender strategy for example – but as the project is implemented and the reports come in, the GM stuff becomes pretty token and no one raises it, and by the end of the project, no one is bothering any more to look at the GM stuff.”

Her take is that development people are being asked to do gender, where you need a deep familiarity with the structure and sociological characteristics of the site of implementation. As she points out, a new crop of experts has come about.

“This is not a profession where there are standards, a code of conduct, minimal expectations of what you need to know and what you can do (i.e., as opposed to evaluation, where a serious evaluator is likely to belong to a professional association in their country, has had training, abides by some gold standards of practice). For now, the gender advisers are cowgirls [and a few cowboys]. There are some exceptions, but I’ve watched this new sub-sector of development for a decade and a half, and I’ve seen little that impresses me. And a lot of tokenism.”

Which leaves women almost back where they started despite the laws and gender-based programmes. The growing strength of the Taliban, the arrival of the Islamic State and lack of international focus on women’s rights, means the struggle continues much as it has done since King Amanullah tried to bring in reforms almost one hundred years ago, as did the Soviets, neither situation ending well.