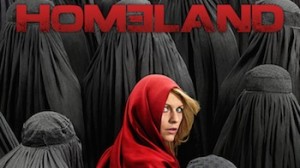 We are now deep into Series 4 in the UK and I mainlined six episodes last week in preparation for Sunday’sepisode 7. Bliss. It transported me back to my time in Afghanistan during 2007- 2011.

Redux took us to the heart of the conflict dealing with the ever present themes of the Taliban, the Haqqani network, drugs, Pakistani intelligence, and the blurred border between the two countries and their intertwined fates and the future….not to mention the United States and its involvement in the region.

TV Taliban leader Haissam Haqqani has kidnapped ex-C.I.A director Saul Berenson, who is in Islamabad.  Carrie Matthison, now head of the C.I.A in Pakistan, is suffering from drug-induced hallucinations. This brings together a number of significant real-life themes – such as the Afghan poppy crop reaching an all time high in 2014, and the money funding the Taliban.

Although it was never proved conclusively, the real-life Haqqani network is suspected of being behind the murder of British doctor Karen Woo and her nine International Assistance Mission (IAM) colleagues in Badakhshan, Afghanistan in 2010 – a chapter in Dispatches from the Kabul Cafe.

On December 4th the London Conference on Afghanistan will take place and all these issues and more will be on the table and up for discussion.  The drawdown might be complete by the end of the year, but the story is as complex and unending as the drama series.