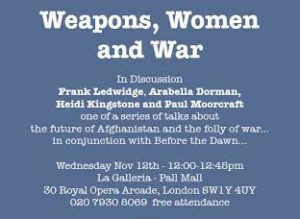 Until now I have shunned the spotlight.  The idea of public speaking has long seemed to me quite possibly the worst thing that could happen to a person, a fear shared by so many of us. Hiding behind the printed word has been my cover.

So I had to channel my inner Angelina Jolie( @angelinajolie) yesterday to talk about The Book in front of several dozen people in central London.

Amazingly, it went incredibly well, due in large part to having brilliant friends on the panel – including best-selling writer Frank Ledwidge (@FrankLedwidge). Frank’s brilliant account of why Britain fared so badly in Afghanistan and Iraq has made him a celebrity in his own right.

Writer, war correspondent, professor and recovering interventionalist Paul Moorcraft has been going to Afghanistan since 1984 when he travelled with the Afghan fighters, the Mujahuddin, who defeated the Russians. He was, as usual, uproariously funny and informative at the same time.

War artist Arabella Dorman (@arabelladorman) spoke movingly about her many trips to Afghanistan where she painted the beautiful country and its people. She caught on canvas the bravery of British soldiers and the PTSD that haunts many of them on return.

The talk, Weapons, Women and War, was held at La Galleria in London, where Arabella showcased her work Before the Dawn, was joined by Al Jazeera correspondent Jennifer Glasse (@JenniferGlasse) hot off the plane from Kabul.

I took to it like a duck to water, I’m afraid to say. Next stop – Hollywood. Alright Mr DeMile, I’m ready for my close up. Watch out Angelina Jolie. You have been warned.